Estimates vary for the size of the market for heavy oils/distillates. The International Energy Agency puts global refined heavy distillates at approximately 4.8-5.3 billion barrels/yr or some $250-300 billion/yr assuming crude prices between $50-60/bbl.

Outside of the USA, the crude slate is becoming increasingly heavy and sour (higher sulfur levels). To manage these crudes and capture the value the industry is looking at ways of ‘upgrading’ these heavier sour crudes and residuals to the lighter high value products which are increasingly required to meet environmental legislation. 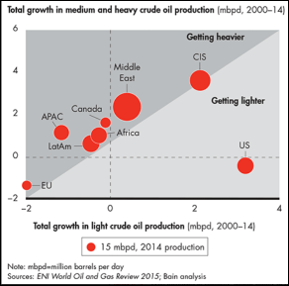 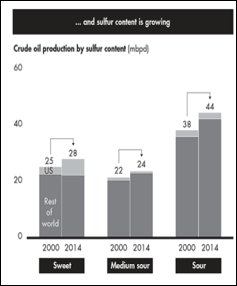 Heavier crudes are those that have a higher viscosity, measured in degrees API.  Sour means higher sulfur content and environmental contaminants.

In addition to the crude slate outside of the US becoming heavier and more sour,  most countries are now increasing the legislation to reduce sulfur in transport fuels: