Where is the greatest opportunity?

The surprising benefit of oil’s bear market and the ESG divestiture phenomenon is that oil assets are at historically attractive valuations. The lack of fossil fuel sector funding is leading to consolidation and turnover in the sector. This makes natural resource, IP, corporate executive talent available on compelling terms. Optima’s ability to identify attractive technologies and compelling projects which offer environmental benefits and attractive cashflow is our greatest opportunity. Optima is at the right place at the right time.

How did Optima start?

Robert Gibbs and Tyson Halsey, CFA initially considered the idea back in 2017. Halsey had been a large shareholder in a development stage Canadian heavy oil upgrading company that as a result of mismanagement did not deliver on its potential. Through Halsey’s efforts to help the upgrading company, Halsey connected with Gibbs, an engineer, project manager and corporate finance strategist, with an impressive 60 year career in energy.

In early 2018, Halsey met with Gibbs and Len Cozzolino, a long-term associate of Gibbs, to discuss a corporate strategy and together developed the idea of a ship-based heavy oil upgrader. Halsey retained Gibbs and Cozzolino, as consultants, to draw up an initial market analysis. That study highlighted the urgent desulfurization market requirements of the International Maritime Organization environmental regulation–IMO 2020. In August 2018, Optima Process Systems issued stock under Regulation D seeking to develop a ship-based desulfurization strategy and a ship-based upgrading strategy.

Does Optima have any Intellectual Property?

Optima does not have any intellectual property in its portfolio. While this may seem disconcerting, oil refineries themselves do not have intellectual property, but use a variety of licenses from varied companies often sub-licensed from large engineering, procurement and construction companies. However, Optima has entered into agreements with its technology partners for its IP under terms and conditions.

Optima benefits from is its broad industry knowledge to identify compelling use of a technology. Its engineering expertise helps Optima to understand the comparative advantages of competing technologies in energy. The company has the banking skills and access to capital to fund projects when those projects are third party confirmed.

How close are you to starting your first project, generating revenues or earning money?

Optima is working with four primary technology companies and evaluating several potential projects. It is looking to start a 1,000bpd heavy oil upgrading pilot plant using a processing technology that is 60% cheaper than conventional upgraders in Central South America with an exploration and production company run by an oil services PhD.

The company remains engaged with two different desulfurization technology companies to use in a ship-based solution which continues to project compelling economics; however, neither companies technology is commercially proven at this moment in time.

There is also activity into using its modular portable refinery strategy in combination with oil field wastewater to provide an attractive cash generating sub-unit within the wastewater treatment projects in fracking in Texas and the United States.

No, Optima Process Systems, Inc. is not publicly traded, but is a Delaware C-Corporation through a Regulation D Filing. Optima raises capital from time to time. Such offers can only be made through legal offering documents and subscriptions agreements. Optima will use Special Purpose Vehicles (“SPVs”) to fund specific projects. Each project will operate as a separate business with segregated bank accounts. This allows Optima to offer a range of projects and technologies while diversifying and limiting the project specific risk to the SPV. Investors in Optima, the parent, will have a more diversified risk profile than a funder in a specific project.

The likely structure of the SPV will be through the issuance of a preferred stock offering under Optima’s Regulation D Filing in Delaware. 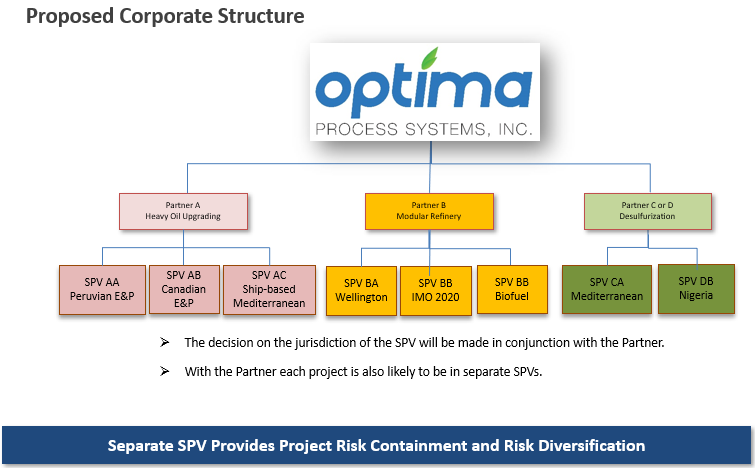 What can be said about the team?

The skill set of the team is extraordinary. Robert Gibbs, Optima’s senior strategic advisor, has designed refineries and petrochemical plants and was a principle developer of the world’s first purpose-built ship-based offshore processing facility aka an FPSO. Gibbs has been at the forefront of major engineering projects and a senior executive at leading engineering and energy companies. He helped orchestrate numerous corporate combinations driving the offshore developments in the North Sea.

Len Cozzolino had been a head of business development for Amerada Hess UK in the 1990s when it grew from 25 to 300 people. As a banker for Dresdner Kleinwort Benson, Cozzolino led an investment banking team which managed the largest private natural gas energy swap in history of natural gas assets in Columbia and Malaysia between Shell and Occidental in 1998.

Donald F. “Jay” Lathen is an advisor to Optima. Lathen is the founder and Chief Investment Officer of Eden Arc Capital Management, an investment advisory firm based in New York City. Prior to founding Eden Arc, Lathen spent 16 years as an energy investment banker, most of that time with Citigroup and Lehman Brothers. Lathen began his finance career with Weisser Johnson & Company, an energy investment banking firm located in Houston, Texas. Over the course of his investment banking career, he advised on over $90 billion of completed M&A and financing transactions for energy clients on a global basis. Lathen received his MBA from the University of Michigan Ross School of Business in 1993 and received his BA from Rice University in 1989.

Peter Veillon is an advisor to Optima. Veillon currently serves as Managing Director at Realcap Strategies, LLC, a private investment firm charged with the oversight of operating companies and real asset investments of a multi-generational, single family office. Prior to joining the group, he spent a number of years in private equity, investing in energy and power and prior to this in manufacturing and business services. He began his post-graduate career investment banking at Bank of America Securities in the Natural Resources Group. Prior to his career in finance, Veillon worked for multinational companies in the energy and natural resource sectors. Veillon is a graduate of Queen’s University at Kingston where he received his BSc in engineering and received his MBA from the Ivey Business School at the University of Western Ontario.

Harry Edelson, CFA, CCP, CDP, is an advisor to Optima. Edelson is a renowned venture capitalist and general partner of Edelson Technology Partners. He brings considerable experience to the Optima team, having served on the boards of directors of more than 150 companies and is published on corporate governance. Edelson has played a role in numerous mergers and acquisitions during his venture capital career. He is not an energy investor but became interested in Optima and its IMO 2020 pursuit and provides valuable business advice based on his impressive career. You can read more on Edelson at Edelson Technology Partners.

Rafael H. Rojas is an advisor to Optima. Rojas is the president and chief executive officer of Venro Petroleum Corp., based in New York City, which markets and supplies crude oil and gas to clients around the world. Through Venro, Rojas owns numerous wells and oil fields throughout North America. Responsible for wells in the Marcellus Shale field in Pennsylvania, his companies produce 7,000 b/d of oil. His Ohio holdings include mineral rights and wells across 5,000 acres and he has extensive contacts with South American refiners and trades their heavy crude oils.

Tyson Halsey, CFA, is Optima’s President. Halsey has worked in the investment industry as a broker, investor, investment advisor and hedge fund manager in technology, biotechnology and energy for 35 years. For the last 17 years, he has been focused on midstream energy master limited partnerships. Halsey has been an activist investor advocating for shareholder rights and value and has been cited in Barron’s and the Wall Street Journal. Halsey publishes on Seeking Alpha and been a guest on CNBC after winning the USA Today CNBC National Investment Challenge. Halsey is a market valuation analyst and student of market cycles and psychology. While working in NYC from 1983 to 2008 and throughout his career, Halsey has developed a network of leading investment professionals.