IMO 2020, which will reduce the sulfur limit on bunker fuel from 3.5% to 0.5%, is expected to have a broad environmental and economic impact affecting the 90,000 vessels that make up the world’s shipping fleet. One year ago, energy market historian and Yale professor Philip K. Verleger, Jr. predicted that the IMO 2020 global environmental regulation could cause an economic collapse and drive oil prices to $200/barrel. In spite of Verleger’s warning and significant reporting on the matter, insufficient industrial preparation has occurred to address this critical environmental regulation.

Only a few hundred ships have converted to scrubbers which remove sulfur dioxide (SO2) from ships’ emissions. Major refineries, for whom significant re-tooling can cost upwards of $10 billion, have not undergone the requisite transformations to address the 3.5 million barrels per day (b/d) shortfall of low sulfur bunker fuel needed to replace the high sulfur fuel which will be prohibited commencing in the New Year.

With IMO 2020 now just six months away, Verleger’s market crash prediction does not appear likely; however, the regulation’s impact on the oil spreads are unmistakable. One year ago, the spread between low sulfur fuel oil (LSFO) and high sulfur fuel oil (HSFO) was about $100/ton (7.33 barrels/ton.) Now the LSFO-HSFO spread is $250/ton and expected to grow to $380/ton, according to Reuters. (In dollars per barrel, the LSFO-HSFO spread which was $13.65, is now $34.10 and should grow to $51.84). Since fuel costs are the largest operating expense for the shipping industry, this fuel regulation and industry impact is a major concern for shippers and a hurdle for the refining industry. 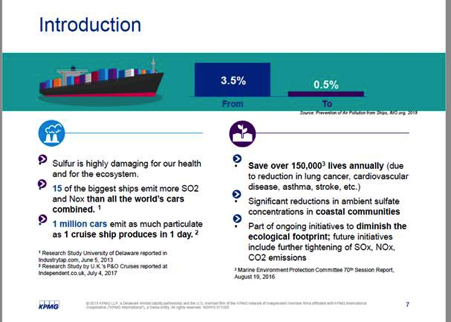 SO2 causes pulmonary disease and contributes to deforestation. IMO 2020 will be a pillar in the transformation toward global energy sustainability and a cleaner planet, just as it was with fluorocarbons in the 1970 whose devastating impact on Earth’s ozone layer was curtailed through new global environmental regulation.

On June 20, 2019, Optima signed a Memorandum of Understanding (MOU) with FluidOil Ltd, a United Kingdom based heavy oil upgrading technology company. “FluidOil is an independent, international oil services technology company that is commercializing the ‘Viscositor Heavy to Light’ (VHTL) oil upgrading technology. VHTL is a proprietary and patented technology that provides a cost-efficient and environmentally sound way to increase the economic viability of heavy oil production by upgrading close to source. The VHTL process improves the properties of heavy oil by reducing viscosity, reducing density, and removing undesired contaminants, resulting in a higher value synthetic crude oil….”

Our agreement will allow Optima to use FluidOil’s heavy oil upgrader technology (VHTL) for land or ship-based applications. VHTL operates at lower pressures and temperatures than conventional higher cost systems which makes FluidOil’s ship-based application more feasible and economic than older upgrading technologies. VHTL takes heavy crude oil of APIo14 (thick as Vaseline) and converts it into a 26oAPI (gasoline thickness), turning a thick low value product that is difficult to refine, into a less viscous refinable product conservatively worth $10 more per barrel.

Optima plans to use new technologies and strategies to make the fossil fuel industry more eco-compliant, optimized and sustainable. Our addressable markets are heavy oil upgrading and desulfurization. Optima’s hallmark strategy is ship-based desulfurization and heavy oil upgrading. Ship-based strategies are not new to the energy industry. Over the last forty years floating systems have been used mostly on the upstream side of the energy industry, but only minimally in downstream processing. Specifically, the FPSO (floating production storing and offloading), a ship-based facility, was first developed in the 1970’s to extract oil directly from the seabed.

Robert C. Gibbs was involved in the pioneering development of FPSO’s with Tentech International and the creation of the Petrojarl 1, a fpso that has been making $250,000 a day since. FSRU’s (floating storage and regasification units) are another ship-based application which makes use of a ship’s attendant assets – tankage, electricity, deck space, steam and accommodations for staff – creating a new profitable energy asset for under-utilized older tankers.

Shippers are interested in working with Optima. One of the world’s largest crude oil tanker companies told us in London in December, it needed one million tons of low sulfur fuel oil for its shipping fleet. The CEO said that if they liked and understood the desulfurization process, they would be interested in partnering with us. Two of the world’s largest ship brokers have had extensive technical meetings with us and are interested in working with our ship-based strategies. With our FluidOil MOU, we are beginning the project development stages of ship-based heavy oil upgrading.

Two proven desulfurization process technology providers are in discussions with Optima. We are negotiating an MOU to desulfurize a residual stream for use on our ship-based system. While our project development is in the preliminary stages, one of the two desulfurization technologies we are considering utilizing offers a return profile that is highly compelling.

In the chart below, based on the technology company’s estimates and not third-party verified, cash flow on the order of $115 million per year could be generated. Our rough cost estimate for a second-hand VLCC (very large crude carrier) is $20 million, the desulfurization process equipment for 30,000b/d being $60 million and engineering costing $30 million. Altogether, one-off capital costs would be just $110 million compared with annual cash flow on the order of $115 million, based on preliminary estimates. 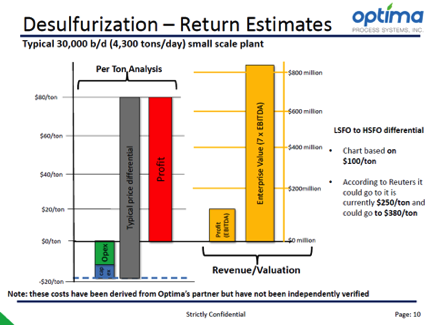 Source: Optima and Estimates from a Preferred Provider

The due diligence, engineering and technical confirmation has not been done for this company’s residual stream desulfurization technology; however, the Department of Energy is working with them for some higher distillates for the US military. So, while the commercial viability is unproven, the spread between LSFO and HSFO is now $250/ton. Consequently, the market potential for a profitable outcome has improved with the dramatic rise in the spread.

Optima is closing in on its first project utilizing FluidOil’s upgrading technology in South America and it is working to provide new desulfurization technologies to address the market opportunity created by IMO 2020. We are partnering with shippers, refiners and financiers to provide eco-compliant and optimized solutions for the refinery and shipping industries. Optima’s goal is to provide several land and ship-based upgrading projects in the coming years to help transform the world’s energy markets to become eco-compliant, optimized and sustainable.